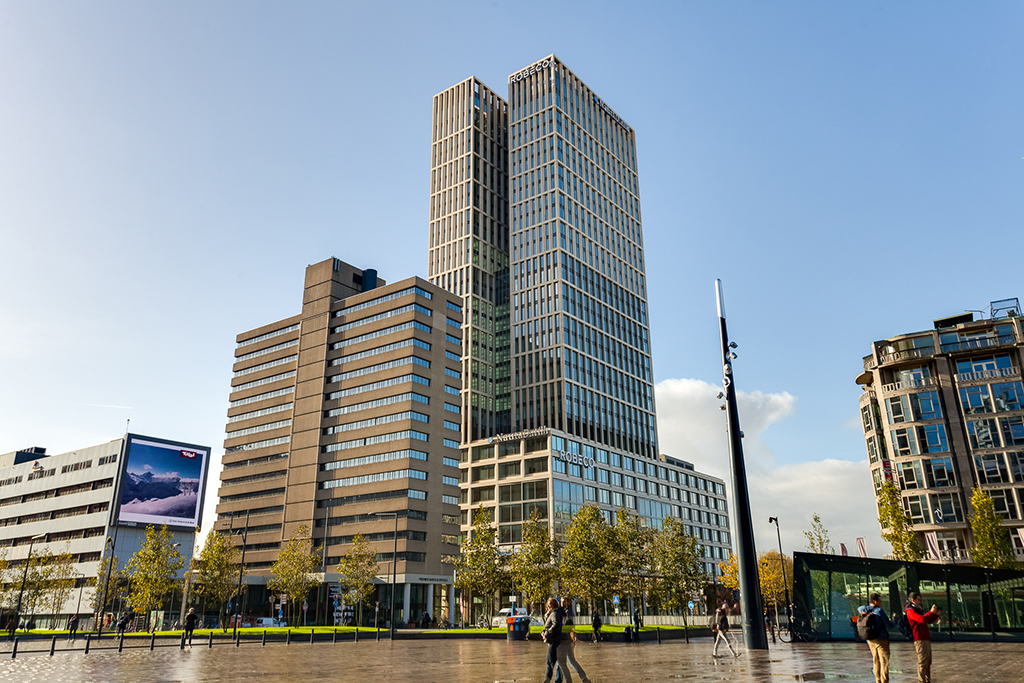 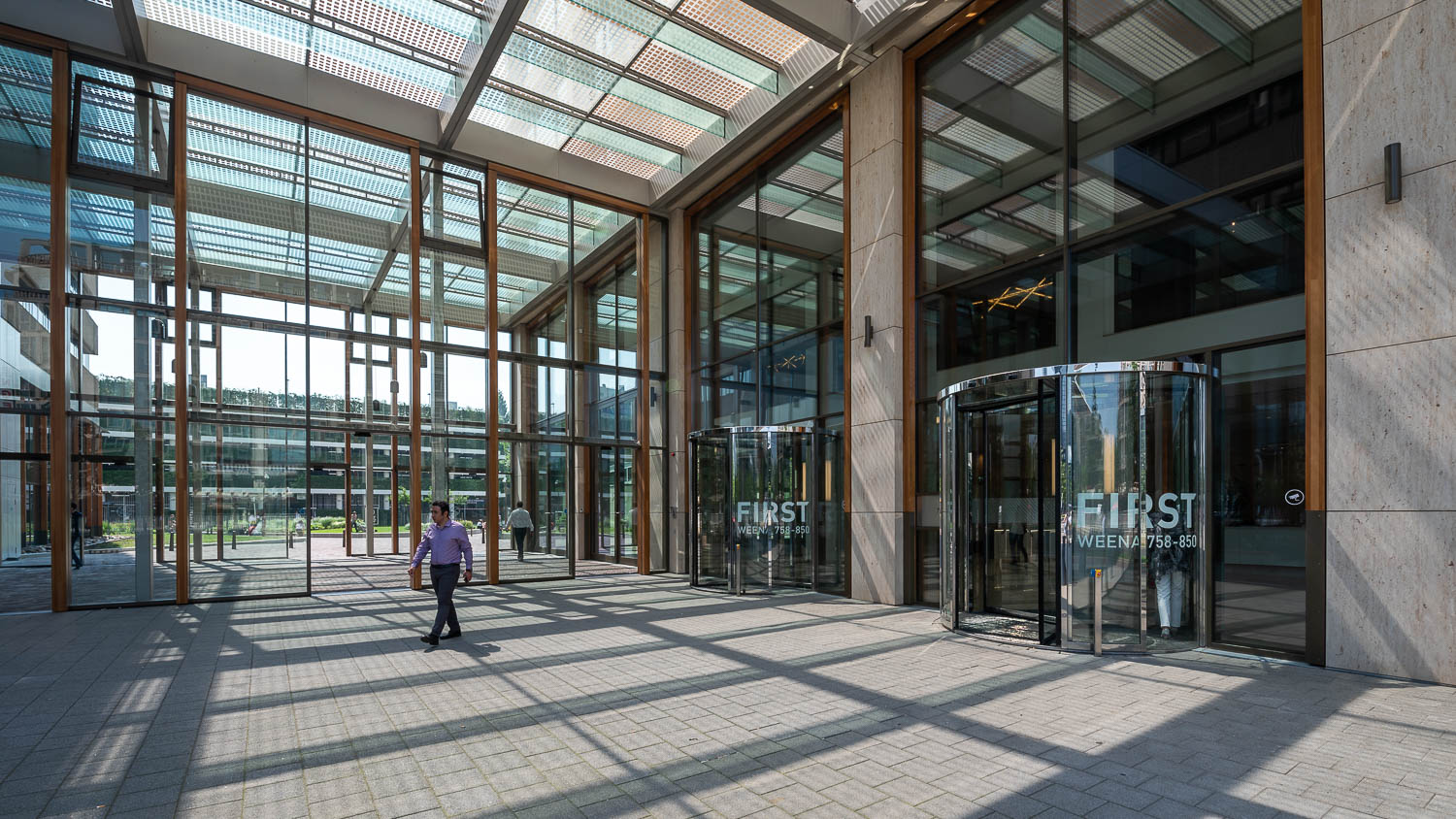 FIRST is located adjacent to the new Rotterdam Central Station in the most prominent location of the Rotterdam Central District. FIRST Rotterdam is a statement of new metropolitan dynamics and the 125 meter tower of FIRST will constitute a bold new addition to the Rotterdam skyline. The whole area will soon have a thoughtful mix and blend of urban functions including approximately 110,000 m2 of  new office space, hospitality, hotel, shop floors and a public courtyard with parking.

Questions about this project? Please ask our experts!

Jeroen graduated in Architecture and Construction Engineering at the Hague University of Applied Sciences.

During his education, he gained practical experience at a municipality, architecture firm and various contractors. From that time on, he prefers to give architectural financial advice and has gained some knowledge and experience with a cost consultancy.

Since 2018, Jeroen has been working at IGG as a construction cost consultant. He is involved in, among other things, drawing up estimates and budgets for several projects in various construction phases. Testing budgets and fees, advising project teams and clients on construction costs are also among his specialties.

In 2014, Guido completed the Master's degree in Construction Management & Engineering with honourable mention at the Faculty of Architecture at Eindhoven University of Technology. Before his Master's degree, he obtained his Bachelor's degree in Building Management at the University of Applied Sciences Amsterdam. After his study period, he worked for one and a half years as an asset manager at Arcadis and has been working at IGG since 2016 as a construction cost consultant.

Guido has been working full-time as a cost manager for the large-scale and multidisciplinary Schiphol A-area project. He now focuses on various residential and non-residential construction projects, as well as renovation and healthcare projects.

The strength of Guido is his customer focus, inquisitiveness and involvement in projects. Hans studied Architecture at the MTS in Leiden and then at The Hague University of Applied Sciences (HTS). After this, he worked as a project manager at various construction companies. After completing his post-HBO Construction Cost Expert and BOB trainings, he started as a construction cost consultant.

Bas has completed his Bachelor in Build and Environment at the Faculty of Architecture of the University of Applied Sciences Utrecht where he specialises in Construction Management. In addition to his Bachelor's degree, he has obtained the Installation Technology certificate at the Avans faculty. After completing his studies, he gained a year-long work experience at Techniplan as a mechanical technician.

Bas has been working at IGG since 2016 as a construction cost consultant. He has since been involved in various projects, such as the Tijdelijke Huisvesting Tweede Kamer in The Hague, the Haut residential tower in Amsterdam, the transformation of Westerpark West (parts of Zout, Peper and Kavel 3), various apartment buildings including De Sniep in Diemen, Waterfront in Amsterdam, City Icoon in Amsterdam, Zalmhaven in Rotterdam and Kruisvaartkade in Utrecht. Bas was also involved in the execution of work for various airports such as Imam Khomeini in Iran, Gateway 2030 in Aruba and the Capital Programme of Schiphol Real Estate. In the latter project Bas worked mainly on the development of the new A-Terminal.

In addition to the above projects, Bas is also involved in the preparation of NEN reports and the performance of building permit cost verification.

Abdullah graduated from Delft University of Technology with a specialisation in Design & Construction Management. During and after his studies he worked at a consultancy firm and a project developer.

Abdullah has been working at IGG since 2016 as a construction cost consultant and is involved in the preparation and testing of construction cost estimates, the execution of feasibility studies and consulting the client regarding construction costs for complex construction projects. The design and realisation process is complex, full of risks and requires good management with insight. As a cost consultant, Abdullah finds it particularly interesting to steer these complex projects in an early phase with creative and integrated solutions that lead to better results within the project frameworks of time, money and quality.

Abdullah is very involved, thinks proactively and looks for integrated solutions to realize complex projects. For IGG, Abdullah has, among other thins, been involved with the renovation and expansion of Paleis Het Loo in Apeldoorn, Hanzehogeschool in Groningen and the University of Groningen. He has also worked on various residential and non-residential projects.

Arno studied Architecture and his Masters in Management in The Built Environment at Delft University of Technology, where he graduated with honourable mention in 2003. Arno joined IGG in 2004 as a plan economist and since 2012 he has been the director / owner of IGG. He is involved in complex non-residential projects and area developments. The strength of his work lies both in the early phase of a development, in order to steer the project in the right financial direction, and in the later phase, when design optimisations are required within the desired quality and financial frameworks.

Arno has been involved in projects such as the expansion of the Amsterdam ArenA, Differ Eindhoven and Twenty4Amsterdam. He is also the founder of the BouwkostenKompas with the uitgaven Woning- en Utiliteitsbouw, GWW en Installaties.

Arno is very involved in the projects and always ensures that projects are realized within the set budgets while maintaining the aesthetic core qualities.

After a short trip to the construction site (1999), Sietse discovered that his interest is in calculating, preparing and supervising construction projects. After completing the Calculator / Work Planner course at Horizon College in Alkmaar, he came into contact with the budgeting and calculation of construction projects in civil and utility construction. To broaden his knowledge in the field of architecture and business economics, he followed a B&U calculation course at BOB training and Small Business and Retail Management at INholland in Haarlem.

From 1999 to 2012 and from 2016 to 2019, Sietse worked as a calculator / planner, project manager and manager at various medium-sized contractors in North-Holland. From 2012 to 2016 he owned his own building management agency. The company focused on independent calculation, preparation and start-up of various projects both in the Netherlands and abroad.

Since 2019, Sietse has been working as a project manager and construction cost consultant at IGG. In addition to drawing up estimates and budgets, and testing budgets, he can consult on construction costs form initiation to execution phase using his practical architectural experience. In this way he can also contribute to making complex construction and technical issues practical.

Chiara has been working as a contracting and tender consultant since 2019 and is involved in various projects.

Steven is an all-round project leader who has supervised construction and real estate related projects for both clients and contractors. In recent years he has specialised in tenders, where he has sat on both sides of the table.

In the role of tender manager or consultant, he has since been involved in more than 80 tenders. His Architectural (HTS) and Public Administration (University) background comes in handy here.

For Steven, a tender is never a goal in itself, but always a means to make projects a success. After all, basically a tender is nothing more than asking the market a question and ensuring that a good answer is given. Preferably several, because then there is something to choose from. By not only organising the tendering procedure, but also formulating the request correctly, the chance of a correct answer considerably increases. A tender forms the basis for future cooperation.

Steven has been working at IGG since 2016 and is always closely involved in his projects, where the interests of the client always come first.

Gert-Jan has completed his Master's degree in Real Estate Management & Development at the Faculty of Architecture of Eindhoven University of Technology and graduated in 2016 on the theme Conceptual Building. In addition to his Master's degree, he has obtained the Technical Management certificate at the faculty of Technical Business Administration. During his studies, Gert-Jan worked for several years as a drafter at Olivier + Partners Architects, which specialises in healthcare. Gert-Jan has been working at IGG since 2016 as a construction cost consultant and is also involved in procurement consultancy, among other things.

For IGG, Gert-Jan has been involved as a construction cost consultant in the projects Oosterdokseiland Kavel 5 and 6 in Amsterdam and Havenkwartier in Rotterdam. As a procurement expert, this included the headquarters of NS (Laan van Puntenburg) in Utrecht.

Gert-Jan's strength is his involvement, both with the project and with the client, his eagerness to learn and his analytical skills.

Rien is driven, creative and decisive, he is open to new developments and likes to share his experiences with others.

He gained his years of experience in the field of cost management, project planning and project management at various employers, before he founded his own company in 2013. The first years of his career he worked for a major client. In the last 10 years he has done many international projects for that company. After 1999, he worked at (small and large) consultancy firms and his specialisation in costs was further developed.

In addition to the projects that he has been carrying out since 2013 as an independent entrepreneur, he is affiliated with a large internationally oriented engineering firm for which he issues cost advice and performs cost management tasks for both small and large projects, for new construction, renovations or maintenance.

Cor has gained a lot of theoretical knowledge of MEP through attending technical education (LTS, MTS and HTS). The practical knowledge has been gained by working at several MEP companies and consulting firms.

His knowledge and experience of both the design and implementation of MEP ensure that he is a good sparring partner and that he can prepare complete, realistic and competitive cost estimates.

Luca completed his Bachelor degree in Architecture at TU Delft in 2019. During his studies he developed a passion for large-scale construction projects. He has started at IGG in 2019. IGG is his first employer and gives him the opportunity to contribute as a construction cost consultant to such a project: the development of the Schiphol A-area project. Here he has a supporting role in the Programme Management Office-team. Their main task is to professionalise, standardise and economise the various projects in the program.

Gerard started his working life at a MEP company where he was involved in designing, calculating and drawing building-related MEP. He now has considerable experience in various functions within the MEP technology. These positions varied from technical advisor to project manager.

In recent years he has gained experience as a cost consultant at a MEP company.

Gerard has been working at IGG since 2019 as MEP cost consultant. He focuses primarily on drawing up estimates and budgets for the MEP design. He is also a source of information for colleagues with regard to sustainability ambitions and MEP issues.

Gerard's strength lies in his analytical approach to projects and his process-based way of working.

Bart-Jan completed his Bachelor's degree in Building Engineering Business Administration in 2015 at the Avans University of Applied Sciences Tilburg. His joint graduation research focused on creating an improved tender process at Hurks Bouw's s-Hertogenbosch, where the search for the correct answer to the increasingly complex customer demand was central.

After his studies, he started his career at various employers both within and outside the construction sector to create as many insights as possible. These insights have led to a clear vision in which Bart-Jan wants to develop in the area of construction consultancy, where his interests and qualities can be fully appreciated. Since 2019, Bart-Jan has been working at IGG as a construction cost consultant.

In addition, Bart-Jan is driven by topics such as efficient, sustainable, circular, demountable, smart & data-driven building and working.

Do you wish to collaborate with IGG?

Do you have any questions or are you interested in a substantive introduction?